For updated information regarding the COVID-19, please click the links below: 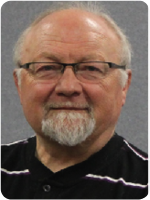 Joining the Manitoba Teachers' Society, I served at the local and provincial level for my 37 years of teaching. I was on the MTS provincial executive for four years. Afterward, as a MTS representative, I served on the Minister of Education's Advisory Board for four years. After retirement in 2003, the Society gave me the honour of becoming an Honourary Life Member in 2004.

A high school aptitude test encouraged me to continue studying the French language and I have used it throughout my career, being editor of the French Journal for ten years for the Manitoba Association of French Teachers and also serving as its President.

I also served on several Department of Education committees and was the co-author of its French correspondence courses. In the classroom, I taught 29 years of junior high, eight years of high school and two years of elementary. In addition to teaching Basic and Immersion French, I coached basketball and other sports. In my five years of coaching grade ten boys basketball we had the good fortune to be ranked number one on two occasions. All in all, a very satisfying career!

I have now served on the RTAM Board for twelve years as a Director and have chaired the Public Relations, the Membership/Chapter and Political Advocacy (Action) Committees.